Review: Zero to One by Peter Thiel (with Blake Masters)— Notes on Startups,  or How to Build the Future 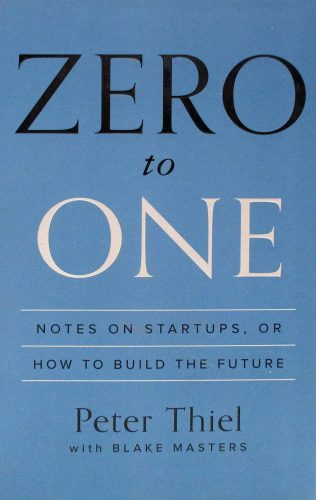 Let me start by simply saying this may well be the most important book I have read in years.

According to Mr. Thiel, the future of our planet—the positive, growth future, not one that ends in nuclear apocalypse, gets wiped out by some strain of super flu, or some other catastrophe—depends on new ideas, and the best incubators for those new ideas will entrepreneurial startups much more often than large, established companies. These startups will spring from bright minds with new ideas—new solutions to problems no one has addressed before, or old problems solved from fresh, new angles that make old solutions obsolete. This is a future that must be planned and chased down. It won’t just happen because we are hopeful. Hope is good, it opens the mind to possibilities, but if we don’t attack those possibilities to make them tangible, we’re just daydreaming.

Mr. Thiel calls this kind of hopeful daydreaming with no concrete plans for change “indefinite optimism.” Contrasting that, an optimism who plans and works to create things is called “definite optimism.” He also defines “indefinite pessimism”—pessimistic about the future without an action to make new things happen (similar to a “the world’s falling apart, so why do anything but smoke pot and play video games?” mentality)—and “definite pessimism”—believing new things will not make the world better, so working hard to do what others have already done (like China madly building coal-burning electrical plants trying to catch up with the US way of life). As he contrasts these:

Mr. Thiel believes our current age is one of indefinite optimism. We’re hopeful for the future, but we have no concrete plans for what that future will look like. In such an environment, we make money through financing paper equity, not build wealth by creating new products or systems to solve real world problems in better ways. As he puts it:

While a definitely optimistic future would need engineers to design underwater cities and settlements in space, an indefinite optimistic future calls for more bankers and lawyers. Finance epitomizes indefinite thinking because it’s the only way to make money when you have no idea how to create wealth. If they don’t go to law school, bright college graduates head to Wall Street precisely because they have no real plan for their career. (70)

Startups, on the other hand, create new things to build a better future through definite plans and working to harness secrets from the universe no one else has yet cracked. They might be big secrets like making space flight possible for all human beings (think SpaceX) or smaller like creating a better way to keep track of personal thoughts and ideas (think Evernote).

The best entrepreneurs know this: every great business is built around a secret that’s hidden from the outside. A great company is a conspiracy to change the world; when you share your secret, the recipient becomes a fellow conspirator. (106)

Of course, the book covers a good deal more than this, and in much more depth than I can touch on here, but suffice it to say that I agree with Mr. Thiel that the world needs more conspirators looking to change the world for the better and fewer just looking to make money by moving it around and charging people interested to do it. (Finance, after all, is really around to fund progress, not just consumer lust of bigger houses and new toys.)

We live in a world with very real problems and we need people working to uncover the secrets that will solve those problems. We need a new wave of entrepreneurs who think in terms of a quadruple bottom line (building businesses that are profitable, respectful of people, good for the planet, and bring fulfillment of individual purpose).

I haven’t found a recent book that does a better job of introducing readers to the mindset needed to pursue this kind of entrepreneurship. If you are in any way interesting in changing the world like this, I think Zero to One should be on your short list of books to read next.

Peter Thiel with Blake Masters, Zero to One: Notes on Startups, or How to Build the Future (New York: Crown Business, 2014).