Review: A Million Miles in a Thousand Years by Donald Miller—Living a better story 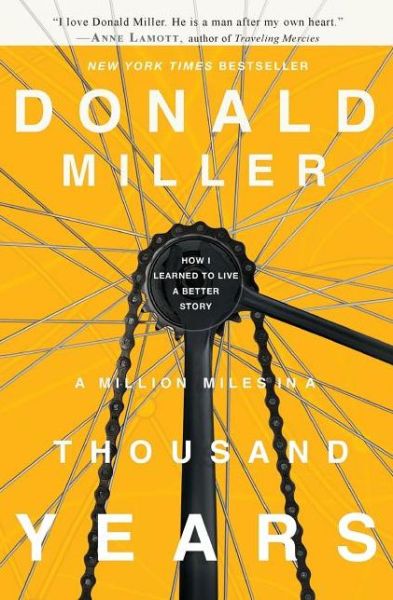 It’s hard to read about Donald Miller’s life—through his memoirs, that is—and not come out a more thoughtful person on the other side. It was true for his first book, Blue Like Jazz, and it his true for one of his latest: A Million Miles in a Thousand Years: How I Learned to Live a Better Story. (I should add. if you haven’t read Blue Like Jazz, I would highly recommend reading it before A Million Miles.)

A Million Miles in a Thousand Years has several interesting threads that Mr. Miller weaves together in his entertaining and thought-provoking way—what he learned about story when he was approached by some filmmakers who wanted to turn Blue Like Jazz into a movie (remember, I suggested reading the book), his adventures in dating, writing, and living, how he tried to apply the principles of writing a better story to living a better story, among others. In his honest and self-deprecatingly humorous way, he again shows the transparency about Christian spirituality that made Blue Like Jazz such a breath of fresh air. He doesn’t shy away from tough questions or honestly expressing opinions that flow against the grain of most Christian thinking. I’m not sure he always comes to the right conclusion on these—which puts him in the same boat with most of us less-honest folks—but by asking the questions as frankly as he does, he gives us a fresh perspective on them that forces us to think through our pat answers again. That is something I have always found useful.

Overall, A Million Miles is a good read, though I have to admit I got a little annoyed with the pacing of the sentences early on. It was like every sentence had the same rhythm and had to end with a punchline in the first few chapters. Though you could blame this on Mr. Miller’s style getting the best of him, I usually blame things like that on the editor, who should be able to see beyond an author’s blindspots and never let the writing get in the way of what is being said. Overall, that is a pretty minor flaw, but it did mean I needed to set the book down after every chapter early on to let my head clear. While I love clever writing, it should never draw attention to itself at the expense of the story or what is being said. Those are the darlings most great authors talk about needing to kill.
In the final analysis, I would recommend this book 3½ out of 5 stars, though I am not sure I accept the book’s major premise that our lives might best be looked at as a story with a divine author, and that some of the elements of our lives have been added so that those stories would be more interesting. That has some implications that I am not exactly comfortable with.

Regardless of that, Mr. Miller is a fine writer and a critical thinker well worth reading. I love following his process in coming to understand story and what he has done with it through his storyline conferences and storybrand marketing. This is also a great book for beginning writers —especially anyone wanting insight behind the scenes of turning a book into a screenplay.
If you have read it or ever check it out, I would love to hear your thoughts on it.

Donald Miller, A Million Miles in a Thousand Years: How I Learned to Live a Better Story (Nashville, TN: Thomas Nelson, 2009).