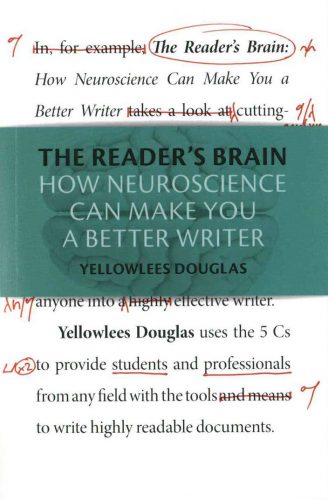 As a writer, I’ve always adhered to Joan Didion’s practice when it came to punctuation, sentence structure, and the like: “Grammar is a piano I play by ear.” However, as a former English teacher, I believe grammar needs to be a logical practice that you can explain it to others. It has to make sense—or at least follow sensible rules with occasional exceptions. In other words, every now and again I find it useful to tune the piano—I want to be sure I’m following (or know why I’m breaking) the conventions I use.

That desire is what drove me to pick up The Reader’s Brain: How Neuroscience Can Make You a Better Writer by Yellowless Douglass. I’ve been thinking a lot about what goes on in writers’ brains as they compose, so I wondered if Ms. Douglass might have some insights that would help me. I think she did, just not a whole lot.

Ms. Douglass has a dry sense of humor that I love and some wonderful, metaphoric (is that a word?) sentences, but overall the book seems too academic and pragmatic for someone who writes inspirational nonfiction and dabbles in trying to sound poetic. However, if I had a friend who was a scientist, sociologist, grant writer, government employee, or statistician who was struggling with writing clear proposals or articles about what they do and they wanted some solid guidelines for doing so, I would definitely suggest this book. Ms. Douglass’s advice on writing seems focused on helping people who tend to have big thoughts—you know, the ones that tend to come out as gobbledygook on the page as you try to get your head around them—go back afterwords and turn them into comprehensible—if not rather elegant prose. This book has great advice for recognizing and clearing up passive voice (her “by zombies” acid test is both brilliant and hilarious: insert “by zombies” into the sentence after the verb—if the clause makes sense with “by zombies” in there, it’s passive voice; if it doesn’t, it’s not), creating “cause-effect” sentences that speeds readers comprehension, sticking important stuff either at the beginning or the end of a sentence, and for writing sentences that basically mirror the way the human brain best interprets the world around it. Her guidelines are solid and many of her metaphors illustrate what a great teacher she must be. Here’s one of my favorite passages:

As many of us learned from a hoary definition of sentence, each sentence is a “complete thought.” The problem with churning out a series of complete thoughts is that sentences become little isolated units of meaning. The challenge is that you must make these little islands of thought seem to fit tighter, ideally, tightly and logically, which is perhaps the single most difficult thing to manage in your writing. . . .

Continuity is, arguably, the single most important aspect of your writing. Periods at the ends of sentences can turn them into archipelagos of meaning, isolated from the adjoining sentences by both white space and either gaps in logic or shifts in topic. When you leave these gaps between sentences, you require readers to cross open water to journey from one sentence to another. Actually, however, you should be building bridges or at least providing regular ferry services between sentences to prevent your readers from ever having to swim from one islet to another. Why? Remember, reading is a difficult, demanding task, even when you’re not terribly aware of all the machinations you’re going through as you read. (62-64)

My biggest issue with the book is that Ms. Douglass writes like an academic most of the time, and sometimes the ferry service between concepts seems lost in the fog. She often deals with nuances that I never clearly recognized or I lose in technical grammatical terms in the same way I did when reading one of my daughter’s molecular, cellular, and developmental biology papers (yeah, I’m still not quite sure even what that means, but it is a real degree).

So while I think her five C’s—clarity, continuity, coherence, concision, and cadence—are right on, as well as the principles she uses under each of them, I wish the book sounded more like Elements of Style than a doctoral thesis arguing that sentence diagramming should be a party game. If it were aimed so a college freshman could easily grasp its concepts, I think it would work, but it feels more like a writing guide for graduate students in the sciences—where I think it would clearly be helpful. As far as grammar books go, I much more enjoyed the style and humor of Eats, Shoots & Leaves (which I will review in a week or so) even though it is really just about punctuation. Had Ms. Douglass written that kind of a book on sentence structure including the reader research she did, that would have been a great book!

But then again, that’s just me. I’m not a college writing teacher or even have an advanced degree. I’m just a hack writer, at best. I play writing by ear, though nowhere near as well as Ms. Didion does—and probably not even as well as Ms. Douglass. Overall, I am glad I read the book and I do think it would be valuable for scientific/academic/mathematical types looking to turn their big thoughts into clear, connected, coherent, concise, rhythmic prose. We could certain use more books, articles, blogs (and reviews?) like that, don’t you think?