Review: Breakthrough Entrepreneurship by Jon Burgstone & Bill Murphy, Jr.—What’s the entrepreneurial process and how does it work? 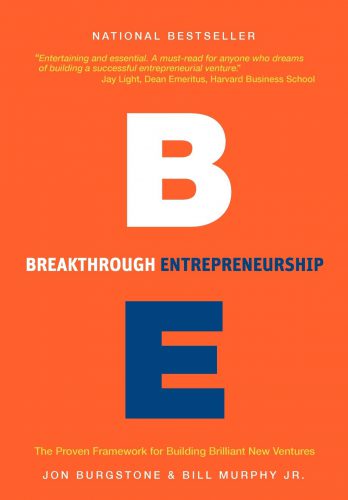 In 1998, Jon Burgstone and Asif Satchu started SupplierMarket, which became the first Internet marketplace for customer-made manufactured parts. They sold it for $1.1 billion 362 days later, setting a record as the fastest billion-dollar startup ever. You would think Mr. Burgstone knew something about entrepreneurship the rest of us could learn from, don’t you think? Well, the book he wrote with co-author Bill Murphy, Jr. proves that he does.

Though I didn’t alway find Breakthrough Entrepreneurship to be a stimulating read all the way through—it did get a little too academic, at times, for my taste—the book is chocked full of insights into the entrepreneurial process and the ways that entrepreneurs think as they see ideas for creating value to the world around them. That’s not to say, at the same time, that it wasn’t well-written, or that, at times, it didn’t get me thinking so much I thought my hair might burst into flames. Good content is still good content, even if a little dry at times. As the old preacher said, “You gotta have the sense of an old cow: eat the hay and spit out the sticks.”

After comparing their entrepreneurial experiences with hundreds of others, Mr. Burgstone and Mr. Murphy outlined seven basic steps or phases every entrepreneur goes through as they turn their ideas into a market-changing business:

Now before going further, it might be worth discussing what an entrepreneur really is, and how this process can apply to most of the world at large, because, as you might guess, someone who can take an idea from zero to a million—let alone a billion—is not someone you have probably ever met in your lifetime. Such people must obviously be smarter than the rest of us, right? Or have a foot up by having all of the right connections? Or they have loads of resources behind them to help them launch their idea? Or they were born into the right families? They would need one or all of these advantages, right?

The truth is, while these would probably help, most entrepreneurs don’t have any of these when they start. They are just like you or me. They might even be you or me sometime in the near future if we learned to do what they do. So what is it that makes entrepreneurs like these different?

The way that they think.

According to the authors,

As entrepreneurs, we embrace the calling to act both boldly and ethically to improve people’s lives. It’s a tough challenge to take on, but at its core, it’s a chance to be the kind of forward-thinking leader who thinks up solutions before the rest of the world even realizes there are problems. (pg. 75)

Entrepreneurs see the world differently. Imagine, for a moment, the entire world walking around holding journals in their hands. Each person uses their journal to record all of the problems and issues that they face in life. As you looked around this mass of humanity, you see that the vast majority of individuals is focused on the pages of those journals, flipping through them, scribbling ideas for what they might to do, fretting, grumbling, praying, or whatever else it is that most of us do when we have our problems right in front of us.

Entrepreneurs, however, would be among the few who have their heads up. They see the problems they have and the ideas they have to solve those problems, but they are also looking around to see what everyone else has written in their journals and how many of them have written the same issues they think they have found a solution for. Of those, the best entrepreneurs are the ones who can then take their solutions, imagine the best plan for implementing them, gather the needed resources and the proper team, overcome their fears at trying something others will tell them is totally crazy, and create a business that implements their solution for as many as possible, profiting enough along the way so that the business model is sustainable.

While many fault business—especially big business—as causing most of the problems and inequities in the world today—and some are so accused with good reason—business is not really about making money at the expense of others, the environment, the national economy, or whatever. Business is really about solving such problems, and the best businesses will solve other people’s problems without creating new one in the process. Entrepreneurial business owners are creatives who love the challenge of solving problems and alleviating pain. Burgstone’s advice for those who want to be successful in their endeavors?

First, train yourself to expect outsized outcomes. An entrepreneur must be at least somewhat subversive. He must train himself to believe that he is entitled to greatness. It’s ironic. Just about never human being who has ever walked the planet had the potential to achieve great outcomes, but most never do so. Why? Because they don’t believe they can. Those who do demand more, who expect greatness, who exhibit audacity—coupled with genuine insight and systematic planning—win. It’s always the outsider. It’s always the entrepreneur.

Second, learn to manage your fear. Fear holds us back, but most often we’re afraid of things that don’t make logical sense. So again, you have to train yourself to overcome them. Modern psychology teaches that the most effective way to overcome trepidation it so expose yourself gradually to the object of your dread. If fears are irrational, exposing them carefully for what they are can make them less potent.

Third, find external validation. Most of your grave as an entrepreneur has to come from inside, but you can’t do it alone. It (238) doesn’t take much sometimes—just a few early customer orders or sincere encouragement from people whose opinions you respect can add steel to your spine. So, take steps ahead of time so you’ll know these kinds of people when their vote of confidence can make the difference.

Finally, follow the framework. We want you to believe—but only in things that are real. Everything in Breakthrough Entrepreneurship is intended to teach you how to reject a thousand marginal ideas in favor of the best ones, and then maximize your chances of success with them. Testing and obtaining maximum information for minimum cost is an absolute prerequisite to developing faith in your new venture. (pg. 239)

Of course, there are a lot of other things I could write in reviewing this book, but suffice it to say that this is a good one to read if you are looking to understand how the big breakthroughs come in business. It’s also a good one if you are trying to think more entrepreneurially in your small business—though I think I would suggest reading The E Myth Revisited by Michael Gerber before you read this one.

At the same time, if you want to wait, I can guarantee I will be quoting this book more in the near future as I write more about thinking like an entrepreneur. So you can watch this blog for more of my favorite quotes. (Of course, if you are a true entrepreneur, you are not going to be that patient. 🙂 )

If you have thoughts about entrepreneurship or have read other books on the subject you would like to recommend, please drop them into the comments below. I look forward to hearing from you!